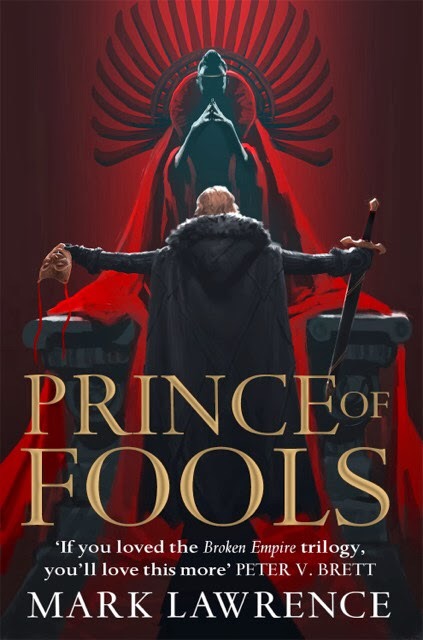 I came to meet Prince Jalan a good few weeks after the novel was released worldwide, thanks to an extraordinarily slow postal service from the UK to the antipodes now known as Australia. This was made significantly worse by the need to have the parcel delivered to my home in the middle of the Queensland never-never – a notoriously long journey for mail of any sort.
Anticipation was high after devouring the Broken Empire Trilogy, or what I lovingly call, “The Thorns Books” – so high it took me weeks to pluck enough courage from a dark little recess to start reading. I knew once I started, I was likely to be medically inseparable from the thing until I finished it. Luckily for those in my life who rely on my care, I was able to carefully and slowly read this novel without forgetting to feed, bath, clothe or change anyone.

Admittedly I’m not a fan of reveiws containing plot points, or worse, glaring spoilers. I never read reveiws before a book, only the blurb and reccomendations from trusted sources. At the risk of sounding obnoxious, I believe the author has gone to great lengths to deliver the story in the way and order it needs to be told. It’s not my place to subvert that. So, plot points won’t be found here!
I did want to talk about what I’ve grown to love about Mark’s writing and what I’m so thrilled to find here in Prince of Fools.
Mark writes a fabulous “anti-hero” – the character who doesn’t want to be the traditional protagonist.

In the Thorns trilogy, we had Prince Jorg Ancrath. This time, we travel with Prince Jalan Kendeth. Two princes from the same continent, who couldn’t be further from each other on a personality scale than if they stood at the poles of the planet.
With both, it took me some time to grow to enjoy their company. Jorg’s age troubled my imagination, more than his deeds or thoughts. He is thirteen or so when we meet him, but by all accounts built like a front row rugby player ten years his senior. At the same age, my brother would have stood equal to Jorg in height – well over five feet in the old scale, and counting. But all the tall thirteen year olds I knew or know are skinny. They’re scrawny little twiggy creatures, tall, but over stretched in appearance, like victims of the Rack. Jorg’s broadness was hard for me to get my head around, but his actions, the thoughts, the words he spoke, all rang true to his inner character, so in time, he grew on me.

Jal is working the same magic in my mind from the pages of Prince of Fools. Mind you, it isn’t his appearance that seems out of step or slightly skewed from the norm. It’s his fear. It’s his down right, shivering, snivelling, self absorbed cowardice that is so against the grain of who my heart tells me he truely is. It’s difficult to imagine a bloke so driven by obsessive naval-gazing, but here he is!
If we met on the street, it’s likely I would give him a second look. Perhaps a third. I might even follow him home and try to jump him in a convenient alleyway. He’s a good looking man by all accounts. I like that type. I do however, draw the line at man-whores, and Jal is the Lord of Man-whores. Goodness only knows how many colonies of pubic lice and various other venerial diseases are crawling around in his under garments. The thought is enough to stifle the lusts of even the loosest women.

But I LIKE that I don’t immediately like Jal. I loved that I didn’t immediately feel comfortably connected to Jorg either. I like that these men are hard work and messy and a bit broken. I like that they have some real shit to deal with on their journey with us and I like that the “off putting characteristic” doesn’t feel common. It feels different and awkward and takes a while to get used to. But in that struggle to get to grips with these guys, you become woven much deeper into their story. You feel as you move through the chapters, that the effort you’re putting in to go with them is being rewarded by the things they take you to see. You feel rewarded by the changes you see, or don’t see in who they are, by the people they meet and kill or shag, by the magic they encounter and run straight towards or away from in equal measure.

I like characters who sit awkwardly in my head. I like that they don’t want to be there and it’s a real journey to get to know them. It’s one thing among so many that Mark Lawrence does beautifully in his work, and I can’t wait for more.

One thought on “Prince of Fools – A Review”